Skip to content
FREE SHIPPING WITHIN USA AND CANADA !!!

The Ankh is an ancient Egyptian symbol of life and immortality

Referred to as the key of life or the key of the nile—is representative of eternal life in Ancient Egypt. Created by Africans long ago, the ankh is said to be the first--or original--cross. The ankh is often shown in the hands of important Egyptian figures, such as pharaohs and kings, preserving their immortality. Moreover, the ankh is commonly depicted in temples and in the grasp of major Egyptian gods such as Osiris, Isis, and Ra. It could also have a more physical connotation: the ankh may represent water, air, and the sun, which were meant to provide and preserve life in Ancient Egyptian culture. Additionally, ankhs were traditionally placed in sarcophagi to ensure life after death.

FREE SHIPPING WITHIN THE UNITED STATES AND CANADA

I have a brass Ankh and wear it daily, as it is my favorite piece of jewelry. Judicael is a master of his craft and it is an honor have this in my collection. cheers<3

The ankh surpassed all expectations. Beautiful 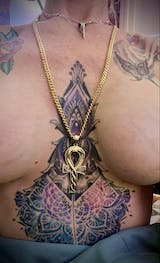 I like to wear jewelry with meaning and this ankh necklace symbolizing life is the perfect statement piece. The craftsmanship is superb and the detail is amazing, right down to the wings and snakes. Like the wings, the snake can symbolize protection or renewal. For me personally the snake wrapped around the ankh reminds me of the delicate balance of life, as snakes are both feared and on the other hand revered. I love everything about this ankh and how it feels when I wear it. It’s unlike any other that I’ve seen. 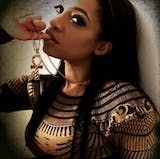 Love the piece, however it filled out and lost the shine in about a month, after just a few wears.. I reached out about how to restore, but never got a reaponse.

Thank you for the purchase and my apologies for never answering back i guess i must have missed the message. Because the ankh you have is Italian brass it can tarnish if you reside in humid areas like Florida . The good thing is that it can get the shine back very quick ..you ca get a jewelry polishing cloth online its inexpensive and easy to use . If not The quick fix would be to rub the jewelry against a piece of clothe for about 5 min . Hope that helps . All the best